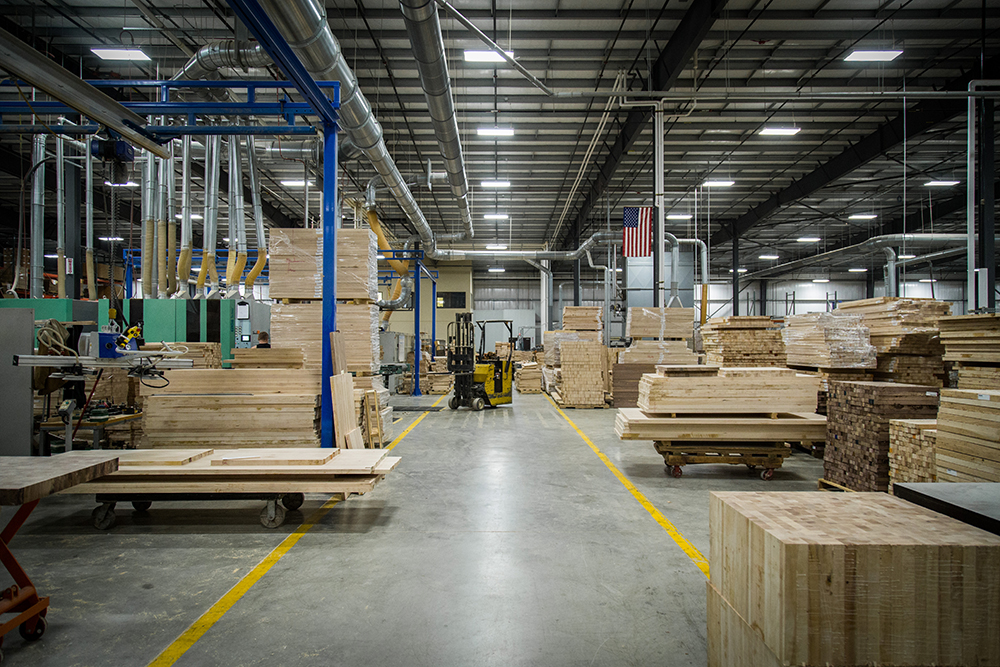 EFFINGHAM, ILL – John Boos & Co., the producer of the famous Boos Blocks ® cutting boards and butcher blocks used by professional and home chefs, will open a new, $16 million state of the art plant in Effingham, Ill., on Tuesday, August 29 at 3:00 p.m. In conjunction with the grand opening, many former Boos employees will join the company’s current 240 staff members and local dignitaries to help produce the company’s 13 millionth butcher block.

Considered one of the most important tools of any chef, Boos Blocks ® have long occupied center stage in leading restaurants, foodservice facilities, and gourmet kitchens around the world. The widely recognized wood cutting boards were originally crafted from hard rock maple in a process developed by Boos in 1887. The production facility features new, automated equipment, but the art of making Boos cutting boards relies on the same proprietary process developed 130 years ago. John Boos continues to maintain a NHLA Certification and is committed to sourcing renewable and sustainable North American hardwoods in the USA.

The Boos brand is admired and preferred by many of the country’s most notable chefs and food authorities. Boos Blocks ® are used by celebrity chefs on popular cooking networks and shows such as Beat Bobby Flay, Trisha’s Southern Kitchen starring country music star Trisha Yearwood, and many more. The Boos brand is sold through leading gourmet retailers in the United States, and exported around the world.

Effingham has been home to the Boos brand since its founding, and company President Joe Emmerich says that was central to the company’s decision to remain here.

“Effingham area craftsmen and women have been dedicated to refining the art of making Boos boards since 1887. We are committed to making our products right here, where we were founded,” said Emmerich. “When we contemplated where to build our new wood plant, our shareholders agreed that Boos belongs in Effingham.” The new 116,000 sq. ft. wood plant will produce a variety of Boos Block ®cutting boards as well as commercial and industrial countertops. The construction of the new wood plant was financedby Midland States Bank Corp.

The new wood plant is located in a 27-acre Effingham campus that includes the John Boos stainless steel facility as well as the corporate headquarters. Boos stainless steel product lines include sinks, prep tables, and other furnishings for the commercial food service market. The John Boos Factory Showroom will remain in its current location at 507 E. Fayette Ave.

According to Effingham Mayor Jeff Bloemker, “the impact John Boos has had on the Effingham area economy is immeasurable. As Effingham’s most time-honored industry, the company has created numerous jobs and contributed countless dollars to the livelihood of the area. We congratulate John Boos on completing this great new complex, and we wish them success in the years to come.”

John Boos & Co. is one of the oldest manufacturers of premium quality butcher blocks in the United States. John Boos & Co. has been in business in Effingham, Ill., continuously since 1887. Back then, Boos founder Conrad Boos, working in his blacksmith shop, produced what would become the original Boos Block ®. Having harvested sycamore from local wooded areas, and processed it in his sawmill, Conrad brought it to his blacksmith shop for finishing. That first block of sycamore was placed on three legs to absorb the shock of a blacksmith’s hammer. A local butcher saw and admired Conrad’s block, and requested one for his meat market. Conrad’s son John, adapted the idea and sold the first Boos Block ®. From that humble beginning, the company has been doing the same thing for 130 years.