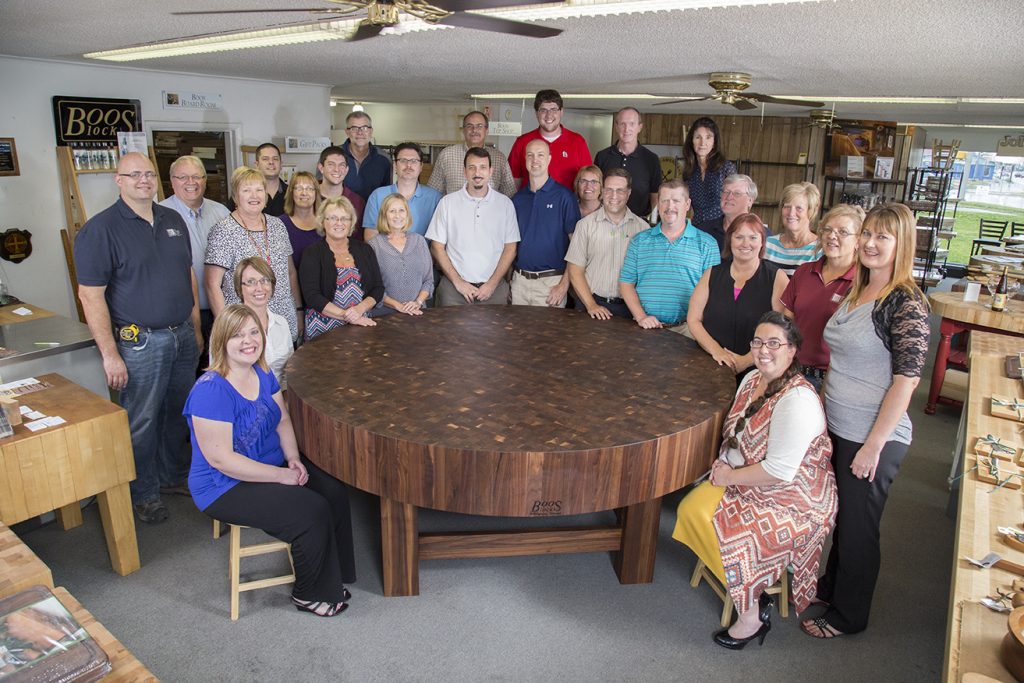 Effingham, IL. – John Boos & Co, a leader in gourmet butcher block kitchen furnishings, and stainless steel foodservice equipment manufacturing, was sought out by TV Personality & Celebrity Chef Tyler Florence to collaborate on fabricating a colossal round butcher block table for Florence’s test kitchen in San Francisco, CA. With 128 years of experience & craftsmanship under their belt, Boos took on the challenge of Florence’s extraordinary request. Thirty man hours later, they had built a massive, 84” diameter solid black walnut butcher block, weighing in at 1,400 pounds. This remarkable block was made by cutting 1-1/2” wide by 10” tall strips of walnut hardwood which was sourced from the Midwest. The 2,500 walnut strips were stood “on end” and glued together to form a square end grain constructed butcher block top; and was then rounded off and mounted on a solid black walnut base. The challenges of a custom block as this, were such that it was made in two pieces to fit through the doors of the test kitchen. Tyler’s plans are to utilize the walnut Boos Block in his test kitchen where all the magic happens…from testing recipes to shooting content for his food app and other fun projects he has up his sleeve.

Superior fabrication by an American manufacturer…John Boos & Co. The leader in the stainless steel and butcher block manufacturing industry since 1887.